This is a song from Art Commando, a Band which played at RADWAR PARTY I and II. The qualtity of the recording is rather poor, because it was sampled from an old BASF-Ferro-Tape. Possibly the only existing recording of this song. (Not even the bandleader had another copy.)

The Making of RADWAR I

Some day in Nov. '87 MWS and AVH remembered the foundation of RADWAR two years ago and we decided to organize a Copy-Party. We had been to several Parties that year e.g. Organized Crime Party (Frankfurt), Danish Gold Party (Odense), GSS-Party (Heilbronn) and had a lot of fun there. But we thought "It is more fun to talk to friends there than to copy some lame software." (We did this always in Venlo once a month, that was enough) So we wanted to make something completely new: a Party at a discotheque !
For our luck, our favourite discos was closed on saturdays and MWS had a really good relationship to the owner. We wrote a small demo and announced the party. The reaction was overwhelming. Everybody was immediatly on fire; fevering for the greatest event of the year. But it took us some time to organize everything, so we planned the party to take place in early January '88. At this time MWS worked at a loanoffice which didn't do much profit. MWS' boss Dieter (DM) recognized the potential of MWS' connections to the C64-scene. He started 'Digital Maketing', a company for good and affordable software. One of their projects was a disk-magazine called 'Digital News', the magazine should be published monthly and bring good gamereports (guess who had the earliest previews of all magazines !), demos, programing tutorials and playable gamepreviews.
The greatest problem in producing the Digital News was the nationwide distribution. It was to expensive for DM to bring it into the shops. So DM decided to sell Digital News directly to the users. For that they needed a good promotion and what better place it there to promote any software than a Copy-Party? The RADWAR Party became the promotion-party for the Digital News.
One of our next thoughts to get rich (we had a contract to get 1 DM (!) for every visitor) and famous was, invite more people. Since everybody in the scene was already invited, we tried to get some local boys and girls. We ask a classmate, who was playing in a band, to perform at our party (they got 100 DM for this). They agreed and we knew their 'fan-community' would come, too. With this knowledge MWS approached a fashion store in Heinsberg and asked them to hold a fashion-show at the party. Of course he didn't tell them, that most of our visitor would NEVER buy anything of their clothes, because they lived far away).
MWS also tried to get a Travesty-Show, men to perform as women, and they agreed, too. And he talked with a 'professional', who would perform playback as Michael Jackson.
In December '87 we visited the FCS-Copy-Party in Bonn. (To promote our Party and to crack 'Out Run' in the Cellar, do you remember?) There somebody introduced a guy to us, who said he was member of '16 Bit', a famous music-group at that time, and he would like to play at our Party. We had no reason to disbelieve. (We went wrong!) So we made some handdrawn papers advertising our Party for local inhabitants.It announced 16 Bit, a Travesty-Show and The Art Commando. Girls would have free admission.
During that period TC persuaded the janitor of a sports-gym near the disco, that we needed a place for our guests to sleep.We promised to keep it all quiet and to clean up in the morning. He said: "OK !" We had no contract, no insurance or anything in written form. He just gave us the keys.
On the 8th Jan. we (BK and AVH) sat together at BK's home, when the bell ringed. Some guys stood outside and asked: "Are you from RADWAR ? We are the Tiger Cracking Association from Bavaria." BK let them in and we told them, they were to early. We copied some stuff, talked and BK's let them sleep at their house, although we didn't know or even ever had heard of them!
Jan/Yeti Factories stay that night with MWS. They finished the last work on the "Digital News" and made some onehundred copies of it. It seem to be a common RADWAR-habit to get our work done "just in time".

At the RADWAR Party I

The next day we went to the disco early at noon, to prepare the last things. Everyone from RADWAR was there, except MWS. We tried to find him, drove to his home, asked his mother, who was (as usual) angry about the disturbance (she worked at night), but we didn't find MWS. When nearly everything was done, MWS suddenly appeared, he had been to the hairdresser.
Then the chaos started, MWS told us, that the Travesty-guys won't come! Since we had a strange feeling about "16 Bit" too, we realized, we were running out of shows, we only had the Micheal Jackson Double ! TC saved the day once again. He called somebody, who had performed at TC's office's christmas party. TC persuaded him, to perform this evening (for free of course!) in front of several hundred people.TC returned and said "Don't worry, we'll have an amateur Prince-Imitator tonight." Ok, that would made a Double-Feature-Playbackshow, but we had no other choice.
At 14:30 the first guests came, and the copy-party began. We had a "guest-book" at the entrance, where everybody signed his name and group. If you read it today, you see, almost every important german, some dutch and few lame groups visited. Here is a small list (ordered as appearing in the guestbook):

There were many people more (ca. 150), who came for the copy-party. There wasn't a lot of new stuff, just some demos. BK ran around with a videocamera interviewing several freaks. But he had some trouble with the handling of the camera, when he thought he was recording, he was pausing, and vice versa. We cursed him for that afterwards ('May the fleas of thousands of camels infest your armpits forever'), but we lost 100 % pure history. At about 19:00 h we began to put away the computers (we actually pulled the plug), to get ready for the 'real' party. Only one computer at the entrance remained where the 'Digital News' was presented. And of course some 'hardcore copyslaves' went upstairs to a balkony of the disco, where they found some electricity. They copied the whole night. (I still feel pity for them, they didn't get the message)
At 19:41 the 'official version' of RADWAR PARTY I started. The music-group 'Art Commando' prepared their synthies for their proudest moments... . A lot of people came, who had nothing to do with computers, just to have fun. Some wondered about the 'Digital News', but most of them enjoyed the evening. The evening went on. The jeansshop presented some clothes. Then 'Art Commando' played some titles live on stage. They did quite well (well enough to perform at RADWAR PARTY II again). We had some breaks between those acts, where we had 'normal' disco-music. Later the evening we had the Playbackshow. First we had 'Michael Jackson', he wasn't THAT professional as he had announced. Then 'Prince', the last-minute-amateur, came and pushed it to the limit, made a hell of a show. He had to repeat several times! He was really great, far better than the 'professional', and he was really surprised about his own talent and the success. The party continued. We drank, danced, drank, dalked (sorry, talked) and most guys got drunken (Oh my God, how could this happen? :-).

At about 3:00 the disco closed and those who were able to, walked with us to the sports-gym. (The others drove by car :-) We said: "Who wants to sleep, come in, who wants to fool around, stay out. Until 7 o'clock there is either inside or outside. And there won't be any trouble inside." (To emphasize this, AVH presented a baseball-club and his ninja-sword) But in those times, things like that were unnecessary, even the drunken ones KNEW how to behave. Today I wouldn't count on that. (see RADWAR Party 7) We had still great fun at the gym, filmed MWS and his girl-friend sleeping, talked and some guys really took a nap. In the morning those who had stayed outside came back, hungry, dirty, tired. They could take a shower, then we cleaned up the whole place and everybody went home, tired but happy to have joined the party.

This party was the first of a whole set of party to come. But it was one of the best. You could feel the spirit, that tied the scene together. There were no fights, no wars, no smashed glasses, no painted walls, there was friendship and fun. You nearly knew everybody at least his group, there were no 'elites' and no 'lamers'. Those who had software gave it to those who had not. I never felt this again. (AvH) 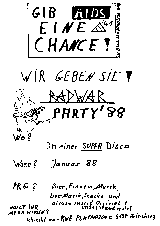 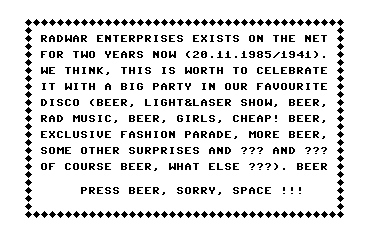 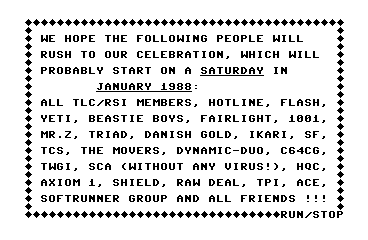