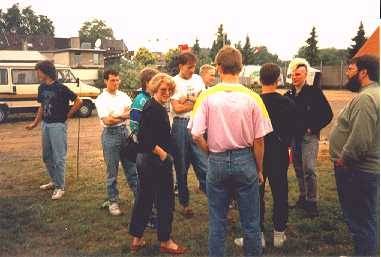 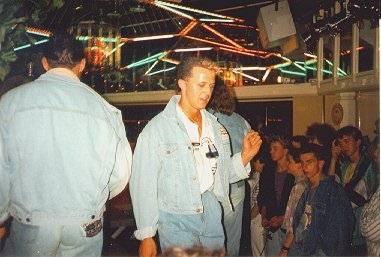 The Making of RADWAR III

Immediately after the Party II (some people even say AT the Party II) MWS and DM wanted to make a new Party. This time it should be something special, not a disco party but a summer camp. They really thought about having the party in Spain! But this was canceled early, because it would cost to much and Heinsberg was better reachable (max 1 day-trip) for folks from Holland, England, Belgium and Scandinavia.
So invitations were spread, friends were called and everybody got really excited. We got so excited, that we forgot to look for a place to camp. MWS always talked about a large field behind his school, were he had already camped with some friends year ago. It was some 200 meters far from our local swimming hall and 500 meters to the disco "La Quinta", so it would be possible to camp, to have a party in the Disco (no problem for us to get the "La Quinta") and take a shower in the morning. But when we visited the place some weeks before the party, it appeared, that the area was much to small and unusable in any form (the grass nearly reached my hip). So we were in heavy trouble again, in four weeks we would face some hundred exhausted guys with no place to sleep, (Did I mention already, that it seem to be a common RADWAR-habit to get our work done "just in time"?)
Meanwhile we planned the other parts of the party. It should start on Friday, when the people would arrive, talk and relax from their journeys. MWS suggested to "settle them down for the night" with a "Feuerzangenbowle" prepared over the campfire. For the next day we thought about "Cracker Olympix" a sport tournament of any kind. We finally decided to do a soccer tournament. (Everybody can play soccer,can't he?. Oh.., wait.., You already saw the video? Well, OK, not everybody can.) On Saturday evening there should be a barbecue with grilled sausages and later a "normal" disco-party. For Sunday we planed to have a breakfast with bread, cheese, jam and coffee at the camp and than it would be time for going home. (As You already can imagine, there was one big problem, it had to be sunny, it simply had to, otherwise we would be pretty pi**ed) MWS talked to some friends to perform at the Party. We didn't want to have "The Art Commando" a third time (in fact they already had dissolved) and MWS managed to get some pretty cool Rappers (one of them worked was the Bouncer of "Las Palmas"). He asked a local bodybuilding studio to show their champions and he also got a fashion shop to have a fashion show (so we could invite some Local boys and girls (!) and keep the entrance fee low :-). But they had no models to perform, so MWS asked some girls he knew to do the fashion show with him. They rehearsed several times at "La Quinta" (even MWS came:-).
And we still couldn' t find another place to camp with so many people (we expected about 50 - 300 campers), where they could wash themselves, had toilets etc. But the worst of all was, TC said he wouldn't come, because he was going on vacation with his girlfriend. So this time we couldn't count on the "cavalry". Then the idea appeared, not to have the party at "La Quinta" but at "Las Palmas", the other disco owned by the same man. That would be quite cool, because they had a small swimming pool there, too! MWS managed somehow to change the location and have the party at the "Las Palmas". But we still had no place to camp! We actually had no place until Friday morning when the first guest were expected!

At the RADWAR Party III

The owner of the "Las Palmas" talked to the owner of the disco next door who was owning a large field with some apple trees directly behind the "Las Palmas". He allowed us to use the field, if we cut the grass there on our own. He gave us his two scythes and we cut the grass with our bare hands! DEF, DM, AVH and some friends worked in turns to get a area as large as possible free of grass. (MWS went to the hairdresser, he came back when the work was done :-) So we finally had a camping ground with pool and toilets, the weather was sunny and warm and we thought, nothing could go wrong anymore..
Time passed and the first guys arrived. We arranged a shuttle service from "La Quinta" to "Las Palmas" to collect those who did not get the right address. Until the evening there were some twenty tents and about 50 guys talking, joking and having fun. The biggest tent was ours (of course) and we had a large pole attached where we raised a Jolly Roger flag (a skull with crossed bones). The flag was stolen on early Sunday morning. Damned pirates ! Later the evening MWS made the "Feuerzangenbowle" on the camp fire. The Friday was quite enjoyable.

Did I mention, that nothing could go wrong? Well that was yesterday. On this Saturday the sky was cloudy. (Those large, dark clouds of course) The soccer match was going to be some sort of water polo and a barbecue was impossible, too. But first of all we went to collect the items for the breakfast on Sunday morning. A friend from the AXIOM 1-Crew worked as a baker. He made 250 bread rolls (Brötchen) for us which were delivered in a huge blue sack. We put this sack into our tent.
During the whole morning more cool dudes arrived and despite of the rain we decided to play soccer. So we all went to a stadion, which was ca. 1 km from the campground and formed four teams:

The referee was Dieter from Digital Marketing

It was fun to see them play on the wet grass. They slipped and skidded every way they went. And of course there were some attempts to tackle Günni. (We have some excerpts of those game on Video. So if You are interested,mail us) After the matches the players went to the local swimming hall to take a shower. The others went back to "Las Palmas". It was still raining, so we did not even try to have the barbecue. Instead we started the disco-part at 17:30. And there the trouble started. The disco had two entrances, the main front door and a small entrance especially opened for us at the back. We let all the guys in, after each of them had paid 5 DM. The normal entrance fee at "Las Palmas" was 4 DM and the man at the front door was not informed (or he forgot, for he is as stupid as he is fat) that on this evening the entrance was 5 DM. So people who entered through the back door paid more than those who came through the front door. You can not imagine how people reacted, when they found out that they paid one Mark more than others. (Today, I still get teased by some guys for this! [Hi Crackman Crew])
But most freaks didn't care, they did business as usual: drinking, talking, dancing. Then it was time for the shows. The three rappers did quite a good show, they skated on stage with their roller skates and the music was fun, too. Later on the bodybuilders showed his muscles. After that, MWS and the girls performed their fashion show. They mimicked a famous Levis-TV-commercial (Jeans out of the refrigerator). They performed so well, that afterwards a model agency was interested. (Unfortunately we gave them our pictures and the video of that evening. Somehow they got lost there, so we don't have any recording of this anymore) Later the evening we had a little ceremony. The winning team of the soccer match got the RADWAR-Challenge Cup and the winner of Digital Marketings Democompetition got some prices, too. So the evening passed, the rain stopped and everyone had a great time. (Except those who ended up in the swimming pool, but that's a different story...)

On early Sunday morning we went back to our tents to get at least a few hours sleep. But we found most tents were already occupied by someone else who didn't belong in that tent. We found FLASH sleeping in our tent on a huge blue sack. Oh,oh that was our breakfast. We woke FLASH, looked into the sack, most of rolls looked like being eaten already once at least. We couldn't use these anymore. So much for the breakfast. Great Party, no barbecue, no breakfast.
We didn't give up. At 9:00 we got up and collected those, who didn't made it to their tents. (e.g.:We found Peter Parker in someone's front garden) Then we visited a friend, who owned a snackbar. We persuaded him (MWS gave him some new disks :-) to lent us his large grill. We carried the grill over to the camp and so we had both barbecue and breakfast! We made some 50 sausages and those who could already eat solid food again came to eat. But most people suffered from a terrible hangover. They started to take down their tents. Around 15:00 most people were gone and we said: "Never again!"

The third party was not the big success everyone had expected. Only 200 or 250 people came. Maybe it was because the date collided with the summer holidays, maybe it was a sign that the scene already declined. Yeah, of course we had fun, but we also had lots of trouble. So we swore "Never again!" and we wouldn't make any kind of breakfast if we would ever violate this oath.